Scottish surnames derived their origins in various ways. Some names developed as an extension of one's profession as in "Nasmyth","Bannerman", and "Hunter." Various surnames became customary associations with one's armorial bearings as in "Cross", "Hart", and "Heron". Patronymic names like "Robertson", "MacDonald" or "Davidson" were very common in Gaelic culture. 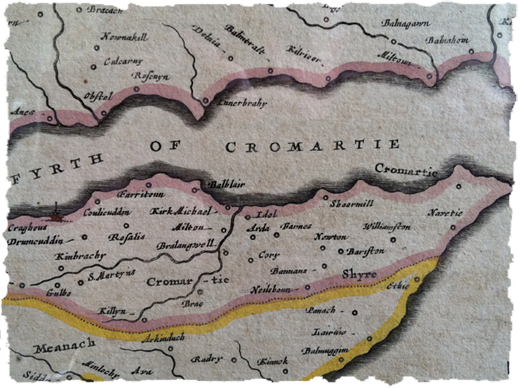 As in our family name, some surnames have their origin in a locality or territory as is the case with names like "Murray", "Cromartie", and "Ross". Since early Scots often spelled words phonically, it is not uncommon to find varied spellings of the same name. Today, our family's namesake village on The Black Isle is spelled "Cromarty", as is Cromarty Firth.

Scottish topographer, Timothy Pont (c.1565-1614), was the first to produce a detailed atlas of The Black Isle in minute detail from an actual survey. On his map of MORAVIA, which includes the Black Isle, Pont uses the variant spelling as we do of our surname - "Cromartie"....on both the Village of Cromartie and Cromartie Firth.

The Cromartie/Cromarty family has long been one of numerical strength in the South Isles of Orkney, especially in South Ronaldsay. We know that about 1450 John o'Cromarty was first recorded to settling permanently on South Ronaldsey, Orkney at Garay. For reasons further discussed below, John o'Cromarite was believed from the Highland family of the Urquharts of Cromartyshire and Caithness. He was of "landed gentry" and is described as being in a position that "he does not need to work". 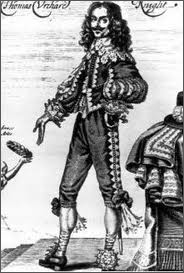 On August 24th,1479 John purchased 1 mk land in Garay in South Ronaldsey, Orkney from John Vrrii and named his farm "Garay" which was later changed to Cara. John o'Cromarty later suffixed his name with that "territorial designation" and became styled John Cromarty of Cara". Purchase of these lands included the purchase of the various Cromarty of Cara titles that came with the Garay (Cara) Estates and was the beginning of Cromarty of Cara as a lineage of the Earldom of Orkney. According to Scandinavian Orkney custom John assumed the surname of the estates where he was from, thus legally becoming John Cromarty.

Upon some old tombstones in Orkney, J.Storer Clouston (1870-1944), an author of Orcadian history, a founder member and second president of the Orkney Antiquarian Society, and a Fellow of the Society of Antiquaries of Scotland. with a yen for heraldry and the study of certain coats of arms, had the Orkney Antiquarian Society publish his findings. Amongst his publishings are his rubbings (reprinted below) of tombstones in Orkney bearing the name Cromarty and on them are the arms granted to the individuals!

To briefly explain the significance of Coats of Arms, it must be said that the families who were granted their own arms were counted as gentry either by wealth (which in those days was determined by ownership of lands), by noble or social position, or by ancestry. Officially, ancestry was the chief factor in determining eligibility for arms, wealth being the "practical test" for identifying "class". Once approved or "granted" by the Court of Lord Lyon, a coats of arms was traditionally inherited by the first born son from his father and these "grants" and "matriculation" of arms respectively have been recorded in the official registry in Scotland since the latter 1100's. According to Mr. Clouston, arms came into use relatively early (beginning 1200"s) in Orkney but were "confined to a few leading families and were nothing like as commonly used as in Scotland". 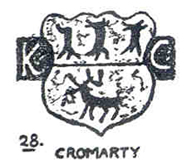 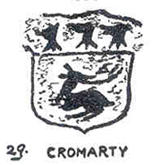 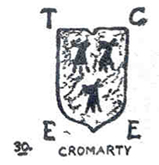 In all three rubbings, we see the three boars' heads, two also containing a stag. Figures 1 and 2 are illustrations of two armorials being joined, which is common when children combine the arms of their mother and father or if a wife conjoins her husbands arms with those of her family. Figure (3) shows only the husband's arms, the three boars' heads. Since it has always been illegal in Scotland to bear the arms of anyone other then your own, we know that the three boars' heads have for centuries been a part of the Urquhart patent of arms and appear today on the arms of the present Chief of Clan Urquhart. It is therefore safe to acknowledge that these graves are Cromarty's who were indeed members of the Urquhart family claiming those arms as their inherited badge of nobility.

Although we may not have specific names and dates to connect subsequent generations of our ancestors back to John o'Cromartie who appeared in Orkney about 1450, we know through DNA testing that Cromarties and Cromartys from various parts of the world today are all genetically descended from the man who settled in South Ronaldsay, Orkney using the name of the place on The Black Isle of Scotland where he had been born and raised.

We have little documentation confirming the geneology of our family patriarch, William Cromartie who was born in South Ronaldsay, Orkney on 31 May 1731. In 1758 he immigrated to America, developing a plantation on the South River, a tributary of the Cape Fear River in North Carolina. We know that he was lineal descendant of John O'Cromarty who later became styled, John Cromarty of Cara after purchasing the Garay (Cara) Estates in South Ronaldsay on August 24th, 1479. The link below traces our patriarch, William Cromartie and other lineal descendants of John Cromarty of Cara to various countries around the world. DNA testing has helped verify this information.

Are you connected with the Cromartie Family?

Join us and support efforts the Cromartie Family Association.

Find out more about us

Join us in October for the next Cromarie Family Reunion.